In the fall of 1967, Heritage Hall Christian School began as a non-denominational school focused on teaching the Bible, instilling patriotism, and offering a quality education .Enrollment the first year was over 100 students. 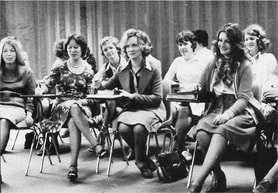 The school came under the umbrella of Grace Baptist Church in the fall of 1972, and saw a steady increase in enrollment through the 1970s and '80s. Three-, four-, and five-year-old preschool classes were added. The high school began in 1976 with the freshman class with one class added each successive year. Since the first graduating class in 1980, over 600 students have graduated from HHCS.
The school has benefited from a continuity of leadership, with Pastor Collins Glenn serving as superintendent from 1972 to 2012 and Pastor Rory Bond 2012 to the present. Dr. Dennis Ice was Headmaster from 1982 until his retirement in 2015. Mr. David Stein has served as Administrator since 2015. 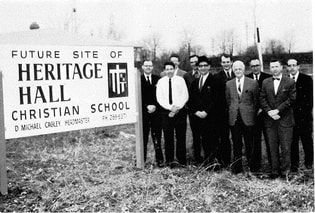 In 1971, a ten-acre tract of land was purchased just north of Grace Baptist Church with plans to build a new school building there. Instead, the church built an education wing onto the existing auditorium building adding 12 classrooms. A third auditorium was completed in 1979 and an additional 8 classrooms were built on the north side of River Road.  Subsequently 7 more classrooms, restrooms, offices and a Fellowship Hall were added to meet the needs of both the church and the school. A capital campaign in 1995 allowed the renovation of the second auditorium into the Fine Arts Center, which is now home to plays, concerts, chapel services, morning assembly, and special events.

HHCS has been an active member of the Indiana Association of Christian Schools (IACS) since 1976, benefiting from the support and opportunities for competition in the areas of academics, fine arts, and athletics.

In February 2012, HHCS achieved American Association of Christian Schools (AACS) accreditation and was approved by the Indiana Department of Education to receive both  School Choice Scholarships (vouchers) and Scholarships for Education Choice (SEC) through a Scholarship Granting Organization (SGO).  Eight high school courses have been approved by IVY Tech Community College for dual credit through Heritage Hall.